Have you been stuck in such situation: no matter when you drone, be it in prep phase or round, and even you try scouting, your drone still gets noticed and shot out by defenders? If so, here’s what exactly what you need. Below, Igxc.com has listed some pro tips for being more stealthy, and more effective on your drone. 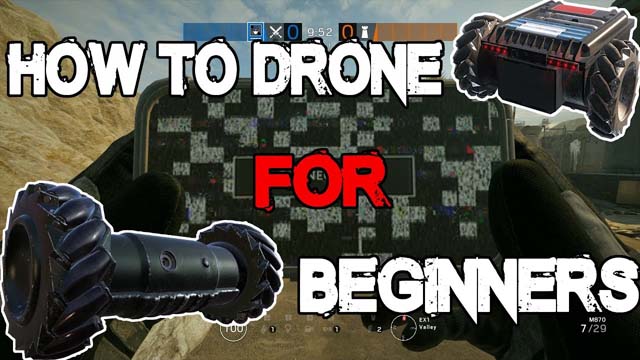 - Don’t bother with trying to drone the whole map/floor. You cannot act on most of the information you receive, and every second you take makes the info from your drone less useful, especially if you aren’t droning the OBJ. Focus on where YOU will be going.

- It isn’t really possible for one person with one drone to make sure that an entire floor is clear for anything longer than 10 seconds. You would need your entire team communicating not just where the enemy isn’t (“lobby is clear”) but where they are (“echo is on objective”).

- If the objective is an objective that can be played reasonably by Buck from above, then you need your whole team to help facilitate that strat. That means droning and then clearing that floor room by room and then having people watch the entry points (typically stairs) to keep it clear. If you are solo Q-ing on casual this is hard as everyone wants to do their own things, but in ranked on some objectives even when you are solo queuing clearing the floor above and holding it is just common sense and everyone should be on board with it.

- Find the safest way to approach. As an attacker you should never enter main lobby on bank by yourself. You should also typically never rappel skylight on any map with a skylight. Try entering through a window that puts you close to where you need to be but is still relatively safe from peeks or run outs. You should clear the room you are going to enter, enter that room (while peeking the doorways into adjacent rooms), and just drone rooms as you clear them. The reason for this is that your intel has a very limited window of usefulness, so you don't want to drone a whole floor and then enter the first room you droned only to run right into an enemy who entered the room 30 seconds ago after you droned it. Once you are on the floor, you should be able to rely on your ears rather than just your drone.

- Try to alternate 10-15s on your drone, and then run to where you droned, find cover, then repeat. If you have the luxury of teammates who cooperate, you can practice in custom games to learn good vantage points for drones, so that they’re as useful as Valkyrie cams. This can save you a lot of time if you have a drone that can see like 3 or 4 rooms and crucial hallways/rotations rather than droning each one individually.

- Another tip is to keep away from other drones, if you see a friendly drone scouting an area go the opposite way as to cover more ground. If you have found the objective, don’t worry about looking for roamers, because even if you spot one they will most likely keep moving, so just assume there are a couple roamers and try to position your drone in a location where you could spot an enemy relocating around the objective or generally just moving around to defend.

- About hiding the drone, though: sometimes you can leave your drone in the open and check if it has been destroyed. I wouldn’t recommend to always do it, but I usually have both my drones up and sometimes I leave one of them open at flank routes. If I check it quickly and see it’s been destroyed, I know a defender walked past it and can prepare for the gunfight.

Here’s a video to better your droning from getting flanked.