On this Wednesday, EA Sports has confirmed the latest FIFA 19 TOTW 41 lineup to FIFA 19 fans, featuring players chosen from those that have been performing to a high standard in the real world during the previous week. Honestly saying, FIFA 19 TOTW 41 is quite unsatisfying and disappointed, with no players rated above 86.

Last week, we see no no cards higher than 88, and many FIFA 19 fans event teased the lineup as “ Team of The Weak”. This week, no cards in TOTW 41 are rated above 86. The highest-rated card this week goes to Diego Valeri of MLS’ Portland Timbers, who is 86 OVR. Next to him is  Oscar from Shanghai SIPG who brings the 85 overall card. In addition, there are some other 80 rated players that some gamers may find value here, as you can in the image below.

The complete FIFA 19 Team of the Week 41 is shown off in all its glory below. If you prefer a list,  you can check a full list of FIFA 19 TOTW 41 Starting XI Players, Substitutes and Reserves in the list at the end of this article. 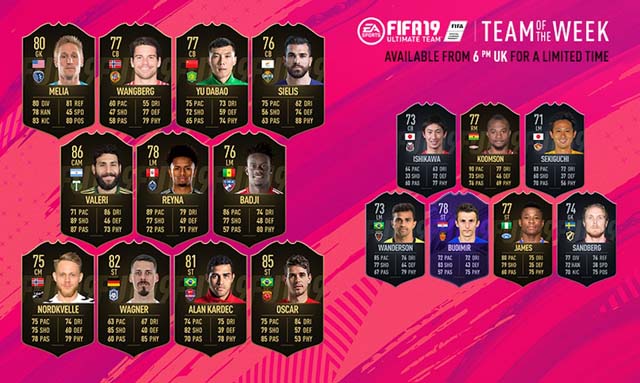 As usual, these players will of course still be available to buy from the FIFA 19 transfer market, but if you're hoping to pack any of these players you'll only have until 6PM this evening to do so, at which point they'll be replaced by the new Team of the Week squad. The latest TOTW 41 will be available in packages starting at 6:00 PM at 6:00 PM on Wednesday, June 27 th, 2019.

So, if you wanna add any starting XI player to your team, why not come to our Igxc.com for Cheap FIFA 19 Coins? Compared to other online sellers, we definitely offer a competitive price and faster delivery.