Recently, FC Barcelona signed a cooperation agreement with Roblox, the leader of the digital game platform for digital games, which has developed online video games for more than 90 million children and young users worldwide. Thanks to this new partnership, users of the Roblox gaming community will receive an exclusive limited edition "FC Barcelona: Talent takes different shapes" avatar bundles to customize the new home kit for the 2019-2020 in red and blue. 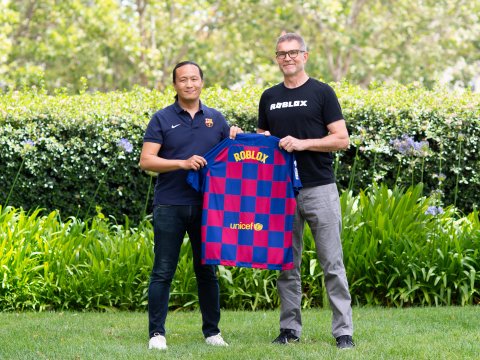 The new home kit swaps the traditional Blaugrana stripes for a checkboard print for the first time in the Club’s history—a new design that takes inspiration from the city of Barcelona and the famous grid layout of the city’s Eixample district, home to some of the most emblematic buildings designed by the great architect Antoni Gaudí.

"Roblox and FC Barcelona both deeply believe in the power of play to foster creativity and bring together a diverse and talented community",  said Craig Donato, chief business officer at Roblox. “We’re thrilled our global community of millions of players can show their support for FC Barcelona by customizing their avatars with these awesome new Barça 2019-2020 kits.”

Statement by Dídac Lee, FC Barcelona board member and head of Digital Area

"We are very proud to promote this innovative project, which will open up a whole new path in the field of football. It will allow us to pass Barcelona FC in a truly sensible way to tens of thousands of people around the world, including children and adolescents. In the FC Barcelona Digital Area, we firmly believe that the best way to connect and generate engagement with our audience is by creating new communication channels to enable interaction across the digital realm, entertainment and sport. This is the first of many initiatives that we will be presenting shortly”.

Roblox's mission is to bring the world together through games. Every month, more than 90 million people around the world explore millions of immersive digital experiences with friends. These experiences are built by the Roblox community and are made up of more than two million creators. We firmly believe in building a safe, populous, and diverse community that is capable of fostering the creativity of people around the world and promoting good relationships between people.

FC Barcelona was founded in 1899 and has a history of 119 years. The club is unique in many fields. Co-owned by more than 145,000 club members, FC Barcelona is the most successful football club in Europe in recent years. Since the 2004/05 season, Barcelona has won four of the five Champions League trophies in the club's history and nine of the 25 domestic league championships. The distinctive Barcelona is often considered “not just a club”, its unique style of football is followed by the best players and coaches in the world, and the club’s tradition of self-cultivating players is well known.